Multiple installs at a show 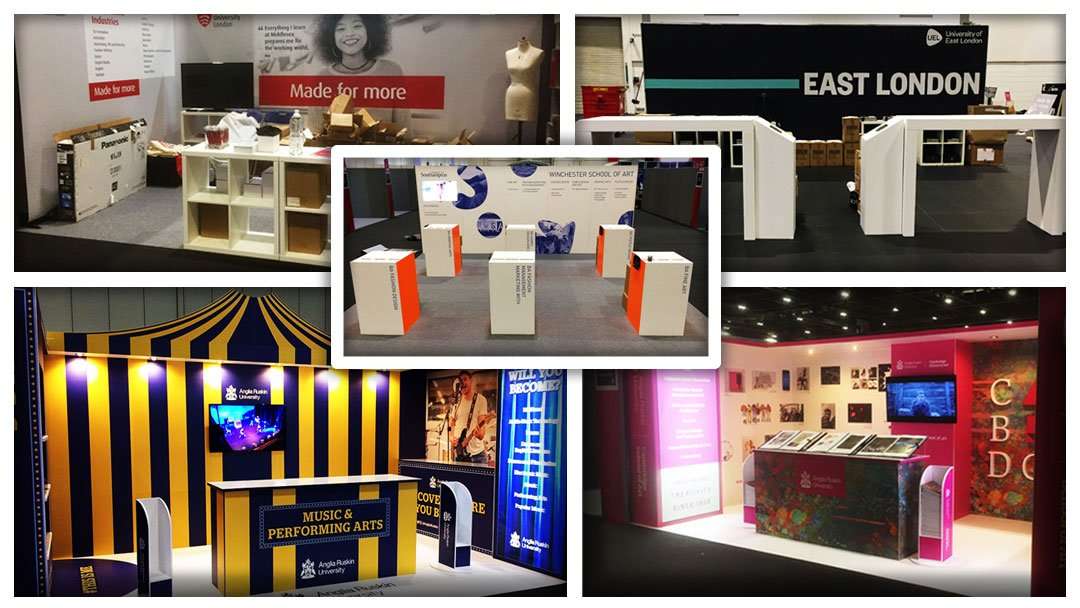 We can’t remember ever building 5 stands at 1 show before! Here’s an insight into the logistics and resource implications when organising multiple installs.

The challenge of multiple installs

Quite commonly within our annual calendar, we find multiple clients requiring an exhibition stand install on the same day. With such a wide variety of industries represented by our portfolio, it is hardly surprising that shows might clash on a certain date. That’s why we have a team of trusted installers rather than a couple of individuals. One install team might be heading north to Edinburgh while another bombs down the M5 to Exeter.
Rarely, however, have we needed to organise exhibition stand logistics for multiple installs at the same show. It presents a unique challenge, especially if the build window is tight. It requires very careful planning and resourcing.
On the one hand, multiple installs could be approached by simply throwing more people at the problem, and to some extent that is unavoidable. But on the other hand, there is a specific opportunity in such circumstances to benefit from economies of scale, or perhaps economies of expertise would be a better way of phrasing that.
All our installers are skilled and resourceful people, able to act with a degree of autonomy based on their experience within the industry and with our exhibition products. Every install is different and things generally need to happen in a certain order, so there needs to be a level of oversight and organisation to each individual build, but they should be considered collectively too in order to complete them all with maximum efficiency.
Multiple installs at a show cause a slightly different division of labour to the usual. The oversight can be done by a ‘site manager’, who has a good understanding of what all of the installs require and is tasked with organising each build and multiple groups of resources; team-leaders, heavy lifters (the ‘grunts’), vans, exhibition equipment, tools and hardware, on-site electricians, biscuits. Sometimes, the pool of installers is most productive working individually. At other times, efficiencies are created by drawing some or all of them together to work on one stand.
The emphasis must be on working hard, but also working smart. Any decision that leads to inefficiency will be rued later on. So, for example, unless it is most efficient to unload all the vans at the same time, the flooring and other equipment required right at the start of the build window should be unloaded first. That means the vans should have been loaded previously with this in mind. But it also means that the guy who’s best at building the flooring should not be the same guy who’s best at unloading vans.
Timings are even more crucial than usual, and the task of ensuring no bottlenecks appear is very much the remit of the site manager. The structure could be delayed by an electrician, who may be delayed by incomplete flooring. A bottleneck could mean the difference between finishing a stand and not. Each client is as important as the others, so it is vital that they all receive the same level of service, whether or not they are physically present during the build.

Universities are beginning to fully understand the importance of how they represent themselves.

At this week’s Create Your Future event at ExCel London, a significant recruitment event on the UCAS circuit for universities hoping to tempt school leavers to carry out their studies at their institutions, there was a definite leaning towards London and the south of England.
So for us, that meant multiple installs for different southern-based clients. We built stands for University of East London, Middlesex University, Winchester School of Art (part of Southampton University) and Anglia Ruskin University, who commissioned stands for both their Music & Performing Arts courses and also their Cambridge School of Art campus.
These bigger shows demand more than just a table with a pile of prospectuses and a couple of roller banners behind (although we did encounter some institutions whose budget suggested that would suffice). The prestige of the event necessitates something to really catch the eye and truly represent the flavour of the university, whilst also looking professional. Even in aiming for these three goals, there is tremendous scope for creativity and personality to shine through.
However, this is no easy feat. It requires forethought, planning and solid design principles to be applied. The enthusiasm of the volunteers on the stand can get you so far, but such a small stand looks somewhat lost and underwhelming at such a big event and in such a large venue. Universities are beginning to fully understand the importance of how they represent themselves, and those who grasp this rather expensive nettle will reap the rewards from such an investment in the quality of the students they attract and ultimately recruit.

Five builds at one show: a milestone event

In addition to our exhibition display systems, our installs also comprised flooring, furniture, lighting and management of significant quantities of prospectuses for each client. So they each required storage areas to be integrated into the design, either inside counters, walled areas, on literature racks or shelving.
Middlesex University dressed their shell scheme space in an impressive 8-banner Link2 seamless back-wall, which provided a professional yet easy-to-erect wraparound. Both Middlesex and University of East London went for a clean, modern look with a mostly monochrome stand. This exudes an air of professionalism, and significantly, allows their brand colour to really come through strongly in the areas of the design in which it is employed.
Winchester School of Art took a slightly different approach, although they also employed a similar clean look, using a stand open on 3 sides to maximise accessibility. Passers-by were attracted by the high visibility and strong highlight colour on their 6 podium counters, each an information point for different courses available at the institution. The back-wall included an integral media point for presentations.
Anglia Ruskin University were confident enough to try something completely different for their two stands. The stand for Cambridge School of Art had the air of a gallery, with wall graphics, media presentation and browsable folders on the front counter showing examples of undergraduates’ work. Emphasising the visual and creative nature of the school was both appropriate and effective.
ARU’s other stand, for Music & Performing Arts, was a similar layout and constructed in the same way using our new aluminium profile framework, but had an entirely different feel thanks to the striking design. In keeping with the courses offered, this stand brought a little ‘razzmatazz’ to the proceedings, and of course hinted at the slightly less earnest nature of the professions that these courses would lead to. That’s not to undermine their professionalism, rather it emphasises the fun and creativity.
Here’s a gallery of images from the event, showing the five stands in varying states of completion and in use by our clients and their delegates. 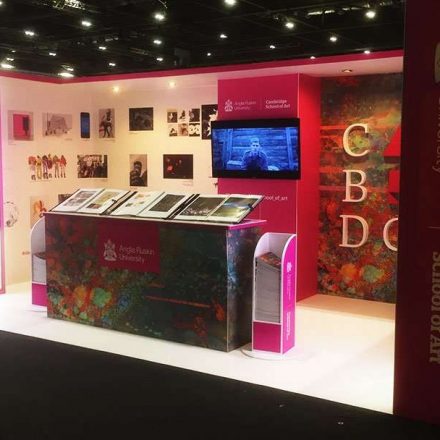 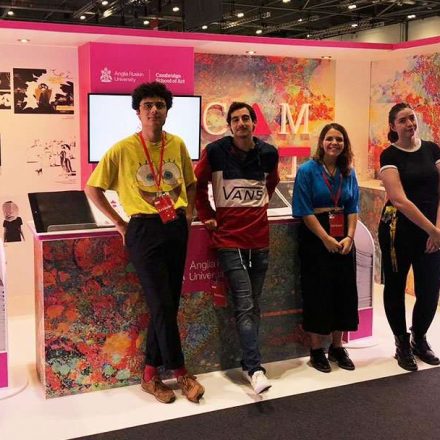 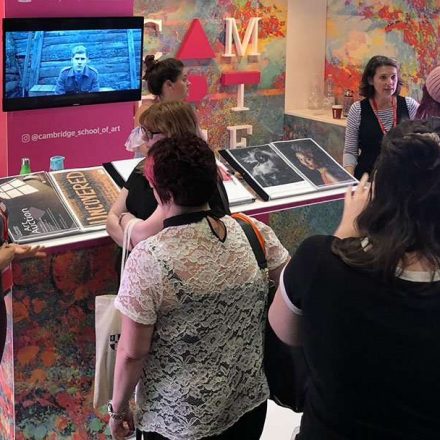 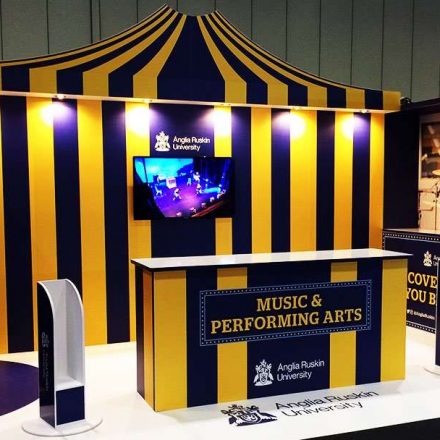 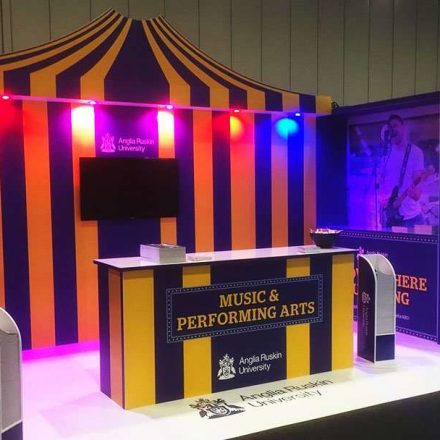 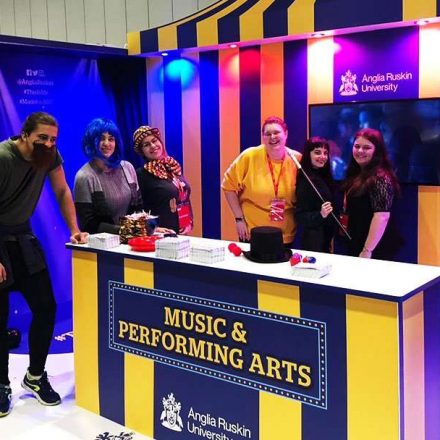 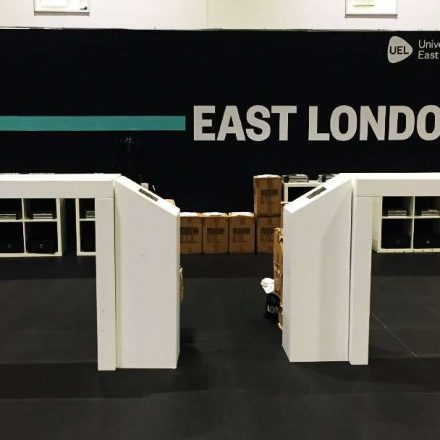 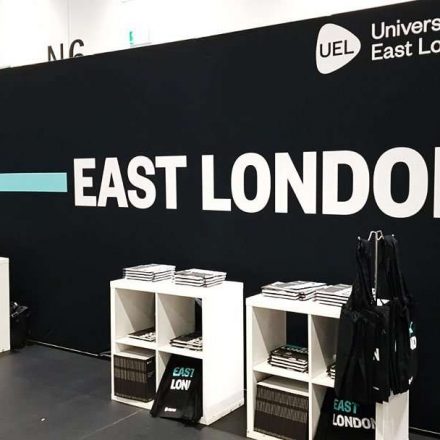 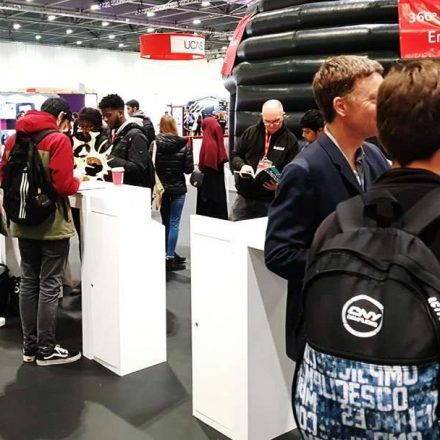 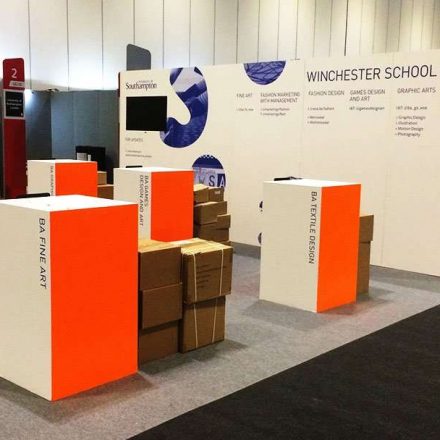 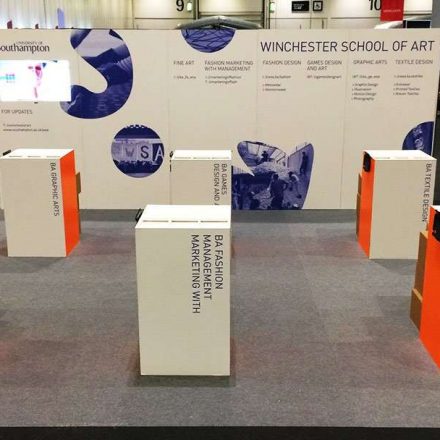 Our horizons and those of our clients are genuinely expanded by this.

Even quite recently, it would have been possible (but difficult) to carry out multiple installs within a four-hour build window, but it would have relied on each stand comprising fairly simple build dynamics. One person can with reasonable ease build a stand of this size using our Link2 roller banners or Twist portable display system, including flooring, lighting and furniture. Multiple installs would therefore simply require multiple people.
The thing that’s extraordinary, new, different is that we can now produce stands like the Anglia Ruskin ones in such a short space of time. And yes, we need all hands on deck. And yes, we need to be super-organised with every aspect of logistics and delivery of the hardware. But our aluminium profile system is already proving to be the game-changer we hoped it could become.
It facilitates custom build quality and complexity in a much shorter time frame. The implication of this is that clients can consider this kind of build for the very first time at a show like this. Even a simple custom build would traditionally require at least a day for installation. It would also require longer than is available for the breakdown at the end of the show.
So, for the first time, clients can reasonably consider bespoke structures as part of their designs. They can look at overhanging structures with downlighting or suspended features. They can incorporate large lightboxes, media points and interactive iPad stations. They can design bespoke counters, desks or seating areas.
And for Rounded Edge, we can offer something new too that we’ve been planning for years. The aluminium system is so quick to build, so strong and stable, so flexible and so easy to transport that we can add new layers to our creative design and installation possibilities. From a customer service point of view, it furthers our ability to provide exhibition solutions. This sits perfectly with our holistic approach.
It doesn’t replace our other hardware systems, but it certainly bolsters and complements them, whilst representing excellent value for money. It sits neatly in our range between the smaller modular systems and the full custom build offering. Our horizons and those of our clients are genuinely expanded by this. And the traditional limitations of multiple installs at a single show are alleviated by all these features and benefits too. 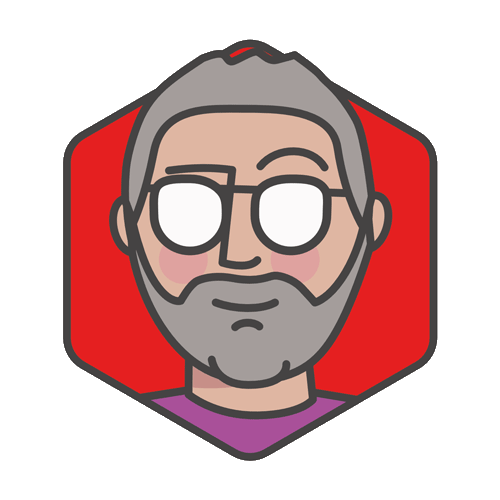 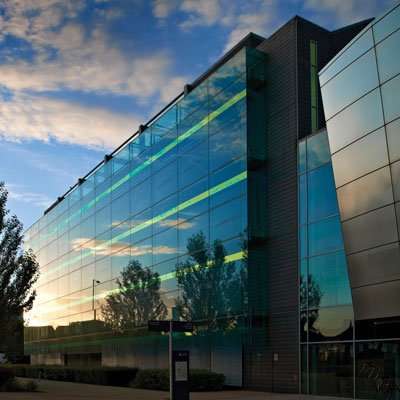 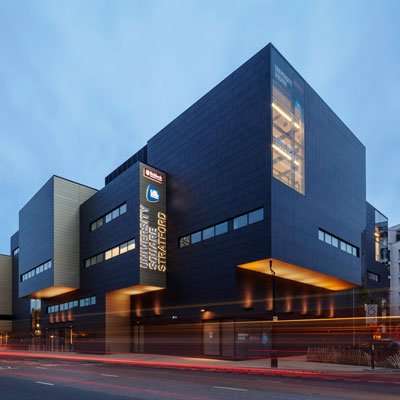 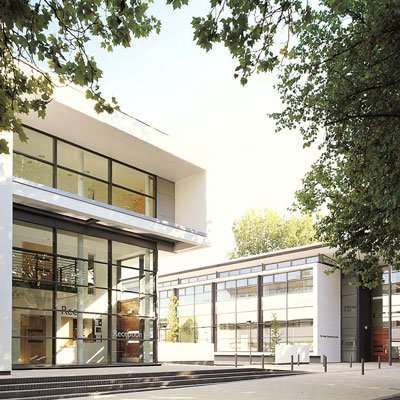 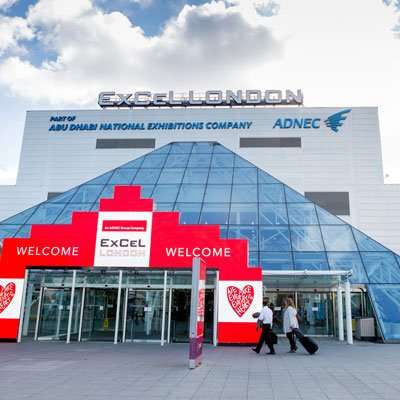 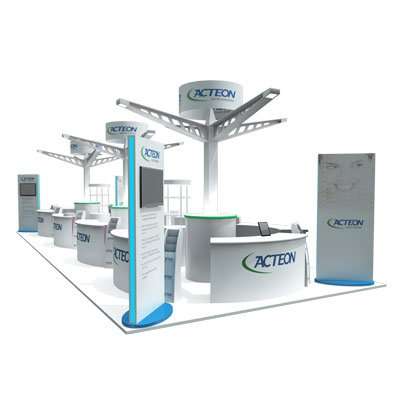 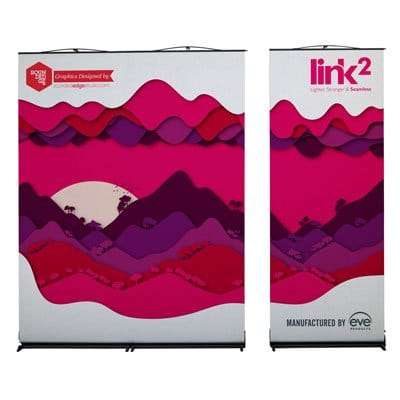 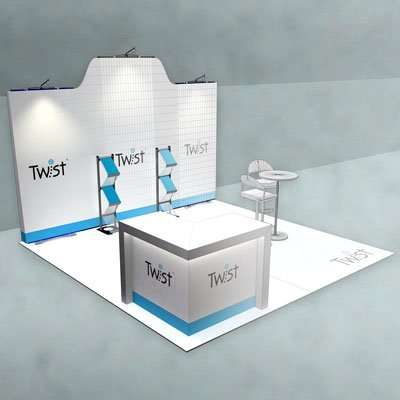 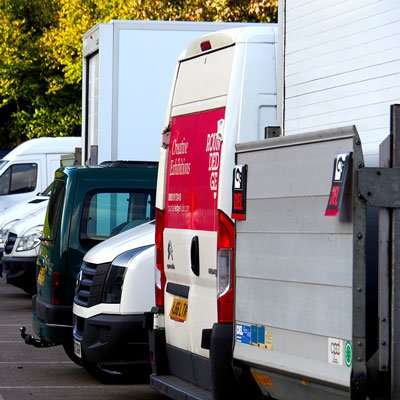 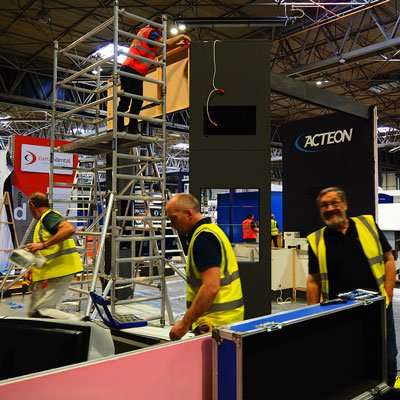 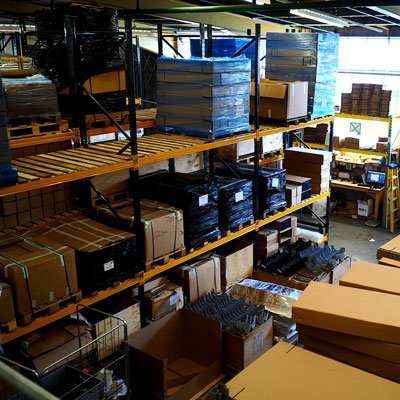 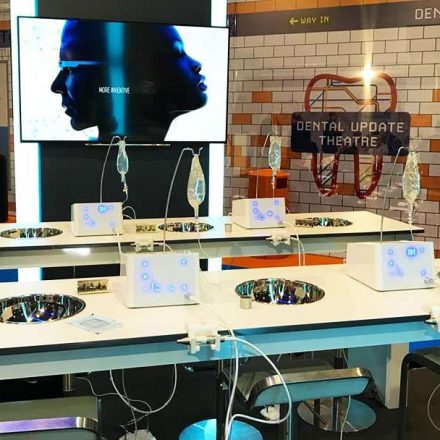 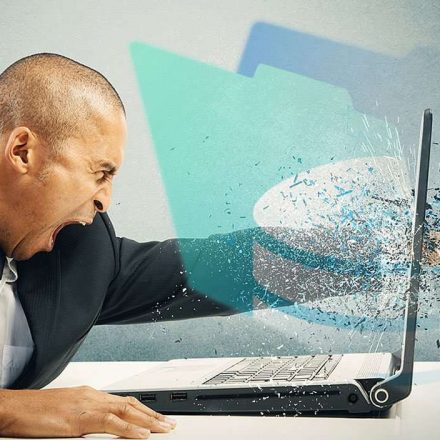 Our FileMaker Server deployment is externally accessible, after weeks of resolutely not being. Here’s the surprisingly complex tale of how to get those green padlocks. 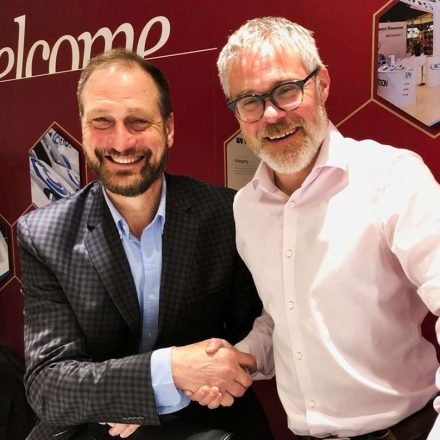 A strong and trusting partnership with your exhibition supplier can make a huge difference to your exhibiting experience and your ROI too.

NIHR become one of the first clients to commission an exhibition stand built using our aluminium profile system, so new it doesn’t yet have a name. As it enters full production, we’re buzzing about the possibilities.